I am not very experienced in baking but now being a mother I have to face my son´s sweet tooth so I rediscover traditional Czech recipes. These remind me of my own childhood and they also bring a bit of Czech atmosphere to my current home in Germany.

This simple traditional spice cake is baked almost in all Czech families. We use special mixture of spices which can remind you of Christmas as this mixture contains coriander, cloves, cinnamon, nutmeg, star anise, mace, pimento, anise, fennel and orange zest. Someone makes the dough with more cacao powder and someone with less. There is now right version. It just depends on your personal preferences. I personally like less cacao powder and more spices. Usually Perník is covered with thin layer of jam (apricot, strawberry or red currant) and chocolate. You can also sprinkle grated coconut on the top.

Preheat the oven to 160 degrees Celsius. In a large bowl combine flour, cocoa powder, baking powder, cinnamon, mixture of Perník spices and brown sugar. If you are baking this cake in the Czech Republic you can get this spice mixture that is called „Prášek do perníku“ (Perník Powder) in every grocery store. As I live in Germany I use either local mixture of spices for Lebkuchen which is a bit different taste but still in the right direction or I prepare my own mixture using ground spices as cinnamon, coriander, cloves, nutmeg, mace and anise. Take the second bowl and whisk together eggs and milk. Combine ingredients of both bowls and mix them till the dough is smooth. At the end add oil and mix again. Do not over mix it.

You can use baking tray (25 x 39 cm) or any other baking form you like. We used silicon rubber baking mold (25 cm in diameter). Grease the baking form with little bit of oil. Pour the dough into the baking form and bake it in the oven for 45 minutes. I start checking the cake after 30 minutes. Use the toothpick, it is the easiest way. When the cake is cooked, take it out from the oven and leave it stand and cool down for 10 minutes. Take a toothpick and insert it into the center of the cake. If it comes out clean, or with only a few moist crumbs attached to it, the cake is done. Now remove the cake out of the pan. You can leave it and eat it like that but I prefer to cover the Perník with chocolate. 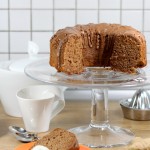